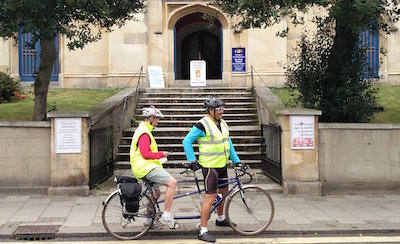 Ride and Stride took place on 12 September, but Michael and I were not able to do our round of the churches that day, because the tandem was going on holiday! Instead, we went past 27 places of worship on Monday 5 September. We started and finished at St Stephen & St Agnes, Windsor, and the route included Staines, Wraysbury, Dorney, the Jubilee river and all the churches in between which came to a total of 27 taking us 3 hours peddling and enjoying one hour for lunch in Dorney which we felt we deserved!

Half the sponsor money will go to the Berkshire Historic Churches fund and half back to St Stephen & St Agnes. It is not too late if anyone else is desperate to sponsor us and thanks to everyone who already has and those who were in our churches on that Saturday. It makes a real difference to the travellers

Many thanks to all!