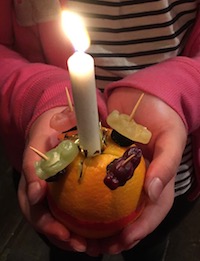 The christingle brings together a number of Christian ideas:

St Stephen and St Agnes hosted its annual Christingle service on Sunday, 27 November, with the children from Trinity St Stephen First School playing a central role. This year’s service was attended by 150 children and another 100 parents, teachers and friends.

Led by Father Ainsley, the children then sang a round to the tune of Frere Jacques:

After Father Ainsley explained to the children the meaning of the christingle, the children stood in a circle around the church with their candles lit and sang Away in a manger.

Every child was given a cardboard collection candle, in to which pennies and shillings could be collected. The service raised just over £300 for The Children’s Society: quite a haul!

The service ended with the children dancing to the ever popular Christingle Rock, led by Head Teacher, Mrs Louise Lovegrove.