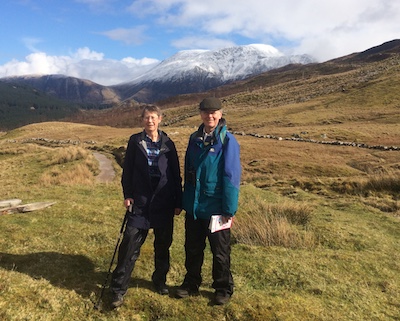 Thank you to the many, many people who sponsored our 100 mile walk along the West Highland Way. The well-signed route passes from the lowlands to the highlands, stretching from Milngavie, which is just north of Glasgow, to Fort William. We walked it in seven stages from 27 March to 2 April, although an early objective ‘to be away from it all at the moment of leaving the EU’ did not quite work out as planned!

This adds up to 96 miles, but we added in another four, to make the round 100, walking from the path to places of accommodation and back again to resume. The walk was all below the snow-line which at this time of year is around 2000ft, although we came close to snow at times, and we had remarkably good weather with very little rain and mostly light winds. It was frosty on a couple of mornings when we set out early, but otherwise temperatures were mild. Good bird watching, including larks, oystercatchers, wheatear, stonechat, buzzard and a lot of hooded crows. An advantage of walking the route at this time of year was that there were no midges! We met many others who were walking the West Highland Way, including visitors from the USA, Israel and the Czech Republic.

At Bridge of Orchy there was a church service advertised, ‘2 nd and 4 th Sundays 11.30am’. We asked whether there was any music at the services and were told, “Yes, the accordion is played by a retired shepherd”! The total raised by the walk will be calculated and communicated shortly. The proceeds will be split equally between the four churches to be allocated to organ repair and restoration projects. Once again, many thanks to our sponsors – we thoroughly enjoyed the walk and are glad that it has generated a useful financial contribution.