St Stephen’s first came into being as the chapel of a Mission House, which aimed to minister to a particularly deprived part of Windsor. It is moving to see, looking back through documents like the Journal of St Stephen’s Mission, just how little the community had to rely on in the early years: the church was built in stages, extended and beautified as more money became available. The same is true of the organ, which was completed in stages between 1875 and 1894. 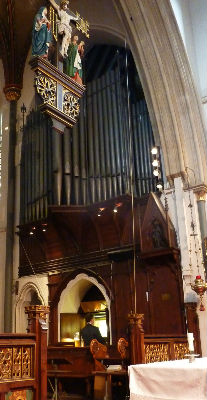 By July 1875, the arrival of the organ of the newly built church of St Stephen was eagerly anticipated, and it was first heard at a High Celebration on 28th November. The organ consultant, Richard Redhead, former organist of All Saints, Margaret Street, was a leading light in the Anglican choral revival and is now best known for the hymn tunes  Bright the vision that delighted and Rock of ages. The instrument was ordered from J W Walker and was planned on a grand scale given the modest means of the church at that time: it had cost £375, and it was estimated that £500 would be required to finish it. The following stops were provided, with the stops marked (*) being prepared for.

By 1894, money had been found to complete the organ in the form that would last until 2014, albeit with three stops and one coupler still ‘prepared for’. Minor changes had been made to the stop list, with the substitution of a Vox Humana 8’ for the planned Clarion 4’ on the Swell and a combined Twelfth & Fifteenth II on the Great. Sir Walter Parratt, organist of St George’s Chapel, gave a recital on the occasion of the re-launch of the organ on (date) and his programme informed the choices of music for the concert, given on 23rd September 2015 to celebrate the conclusion of the latest restoration. Sadly, by 1909 complaints were already being made about the heaviness of touch, and the church considered introducing pneumatic action when the electronic blower was installed.

Thus, the aims of the restoration in 2014-15 were twofold: to address the heaviness of touch and to complete, finally, the tonal scheme as faithfully as possible to the original design. The addition of the Clarinet 8’ to the Great Organ, the Violone 16’ and Principal 8’ to the Pedal provided new tone colour and depth. The ingenious Pedal Octave Coupler, with its own wind chest in the top octave, provided the Pedal Organ with definition and versatility. For the third time in our history, the reopening of the instrument was celebrated in 2015 with a recital by an organist of St George’s Chapel, Richard Pinel, complemented by sacred choral works drawing on the rich liturgical heritage of this unique place of worship.